The great divide: Strategics vs sponsors in CEE

Strategic buyers and financial sponsors share much common ground in how they view future growth and deal opportunities. At the same time, their dealmaking experiences, market perspectives and motivations can be in stark contrast, each having unique requirements and faced with their own financial pressures and considerations.

This much is evident in our findings. One example is the fact that 76% of PE firms investing in CEE/SEE have adjusted deal terms to cope with the currently precarious environment compared with 58% of corporates who said the same. It is generally accepted the PE funds are hawkish buyers that look to create as much value as possible from a deal from the outset, including investment terms that are favourable to them. One obvious point of contention in deal terms is asset valuations. Unlike corporates, PE buyers do not benefit from cost synergies and so will often drive harder on price.

A PE house will use its experience to help an acquisition target's management team to increase the value of their company as swiftly as possible, rather than fit an asset into the growth strategy of what may be a large and mature corporation. This aggressive value-creation mindset, and the need to come into the asset under the right terms, may explain the higher showing of PE firms changing deal contracts amid the pandemic compared to strategics.

When asked about challenges when implementing their most recent deal, there were other splits between the two investor types: 71% of corporates felt that an unstable political environment was a concern opposed to only 38% of PE firms. Political risk does tend to be higher for corporates which, unlike PE, do not have the full gamut of sectors to choose from in their M&A. Instead, corporates are limited to targeting assets that are strategically aligned and which may belong to a sector that falls victim to new taxes or other onerous policymaking. PE has much more flexibility and can diversify its risk to avoid these surprises. That said, political developments can still have undesirable impacts on certain existing portfolio companies held by PE funds too. 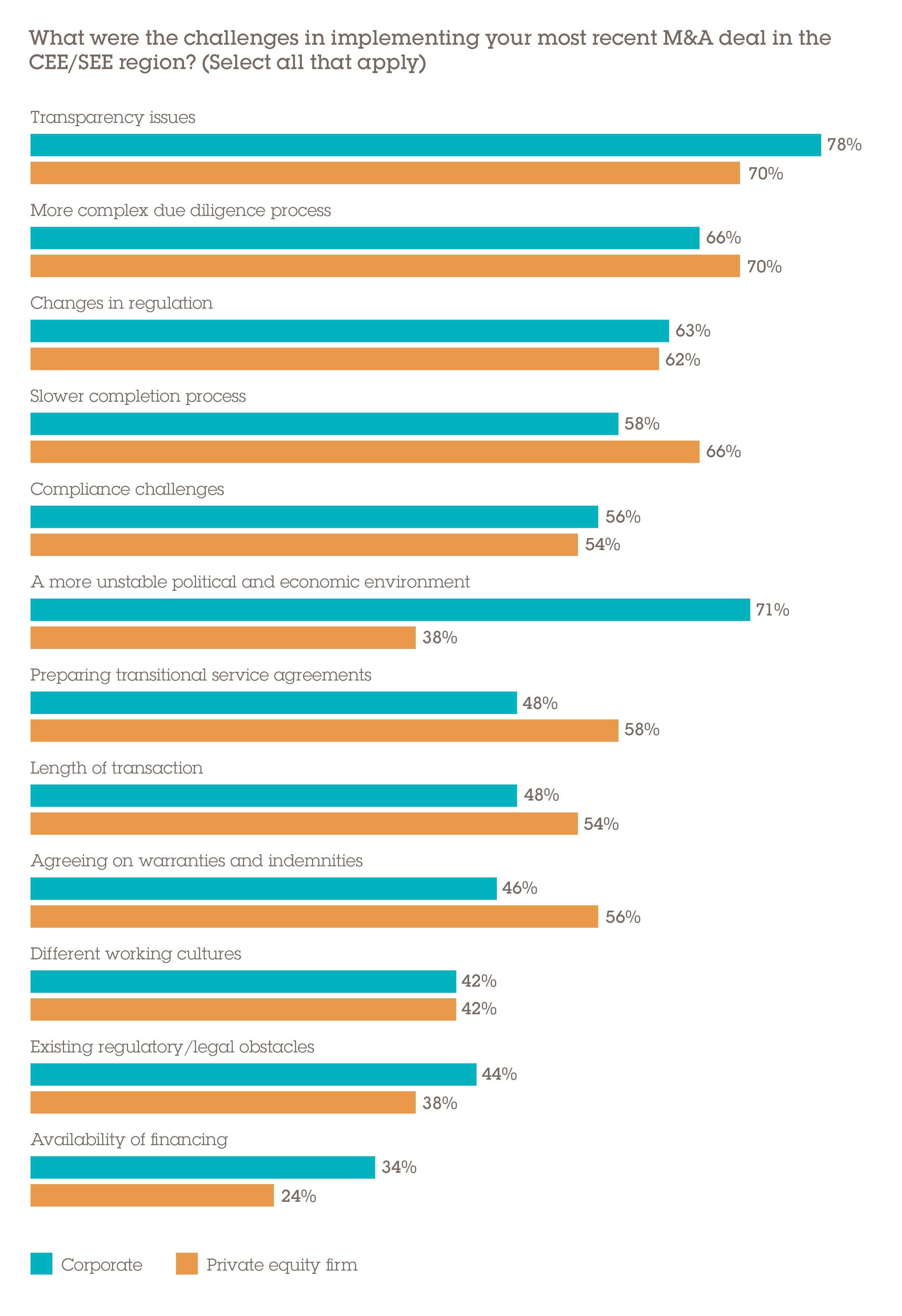 “The unstable economic and political climate was challenging during our last deal. We were concerned about these factors, because it directly affects the earnings of companies if taxation policies are changed or in case revenues cannot be increased due to the economic situation,” says the managing director of a US PE firm investing in the region.

Regulatory hurdles can prove to be a challenge in M&A processes for PEs and corporates alike. A slow-moving judiciary is one common complaint of the Czech market and this has the potential to jam up M&A processes. “Political, economic, regulatory and compliance challenges really affected the speed of our previous transaction. It was not easy to obtain approvals for the transaction and the authorities were rather strict with their evaluations,” the finance director of a Czech corporate said.

The passing of greater controls on foreign direct investment (FDI) in certain CEE countries is one of the most significant regulatory developments of the past 12 months. This happened after the European Union warned of the potential for companies from outside of Europe to exploit the pandemic with takeovers of strategically valuable businesses, such as those in healthcare, defence and technology.

Markus Bruckmüller, partner in Wolf Theiss' Ljubljana office, explains: “Poland and Romania both banned Huawei's involvement in their 5G infrastructure development in the past year, for example, while Slovenia recently introduced some of the strictest FDI screening rules in Europe. Under the new rules, not only are EU companies required to undergo a preliminary screening that may lead to an in-depth investigation before FDI approval is granted, even Slovenian companies with EU ownership fall within the scope of authorities.”

However, regarding the legal and regulatory aspects that were most challenging, 72% of PE firms said intellectual property (IP) law was problematic, compared to only 46% of corporates; while 63% of corporates said environmental safety laws were an issue versus 42% of PE respondents. 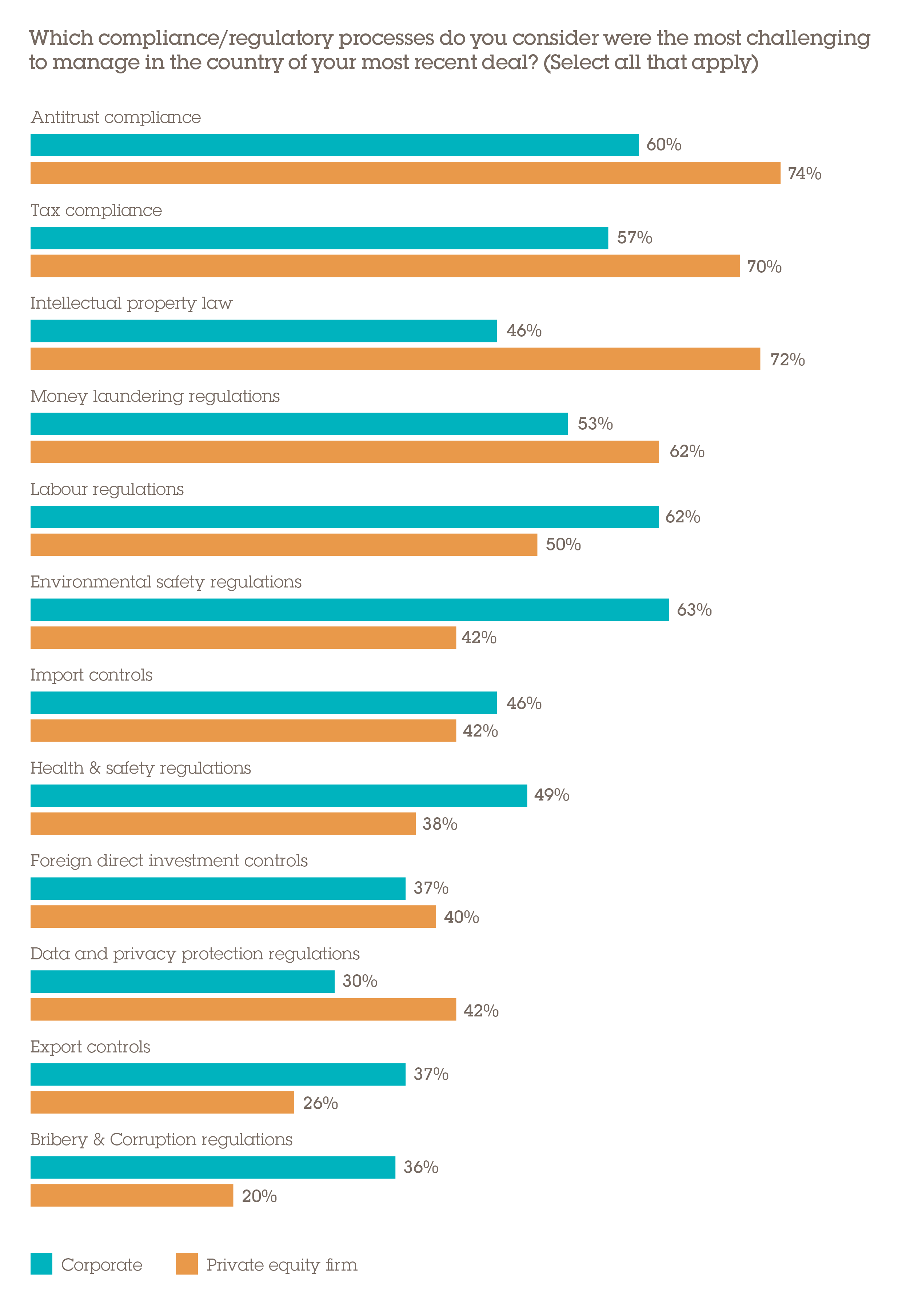 PE's disproportionate concern over IP ownership and usage rights aligns with its dealmaking motivations. Nearly half (48%) of financial sponsors told us that the main driver for their next deal will be IP/technology, more than double the 23% of corporates who said this. 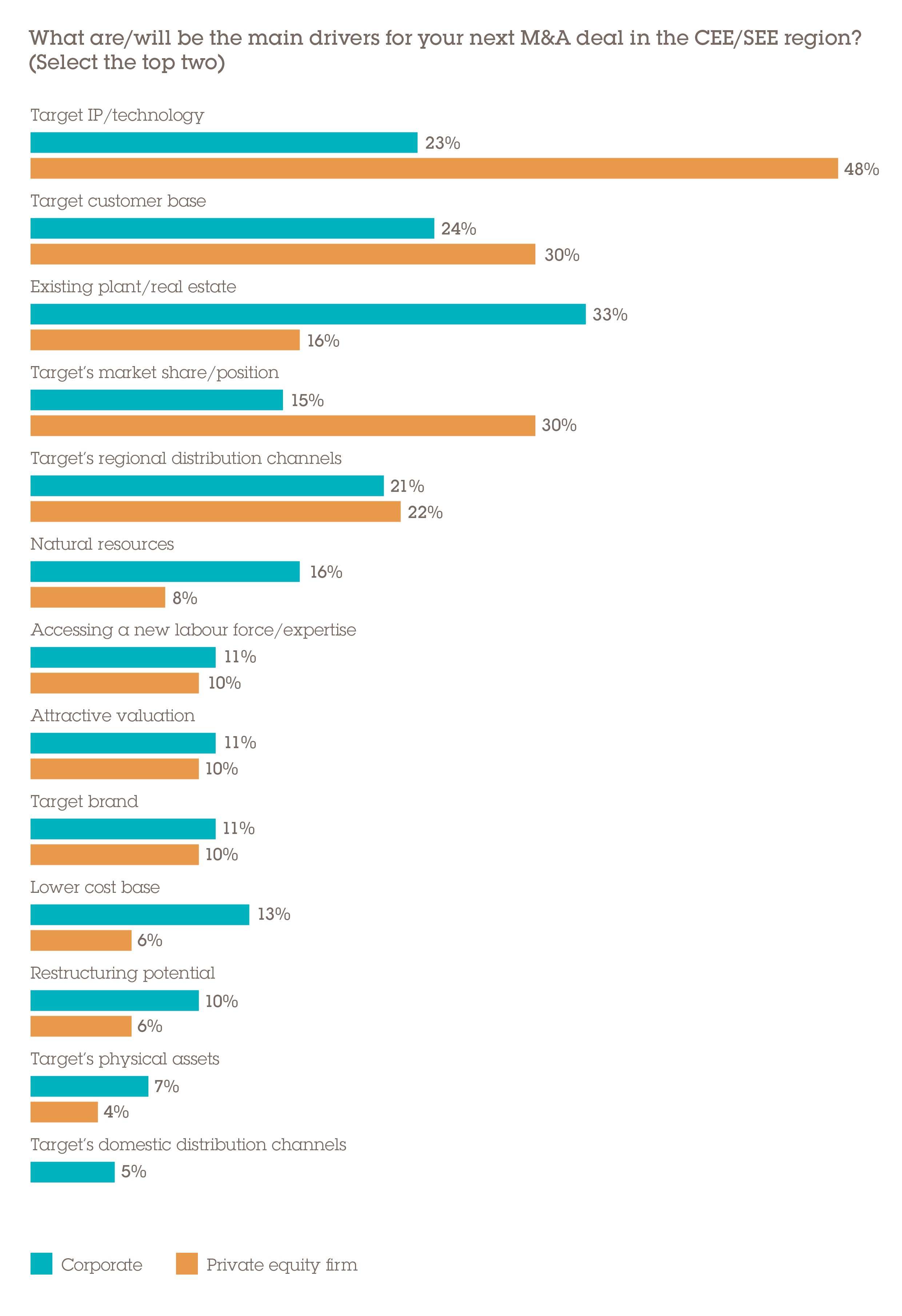 Overall, we can see that strategic buyers' deal strategies are more diverse, which speaks to the fact that M&A between corporates is far more strategically motivated and specific to the needs of the acquirer in question. For PE, IP and technology have long been identified as highly effective value-creation assets. This was made clear in 2020, a year in which tech has proven itself to be a great enabler of growth, and which has separated the winners and losers during a period of unmatched global economic disruption. Naturally, this has driven up multiples.

“The development that is taking place in TMT has been phenomenal. But this has led to the IP and targets priced higher than one would expect,” says the managing director of an Austrian PE firm.

Given that IP – and especially tech IP – is the ‘jewel in the crown’ that can be the answer to outsized financial returns, the efficacy of due diligence in this area is absolutely paramount. The CIO of a Hungarian PE firm who told us that the most challenging regulatory process to navigate was IP law added that “there were problems during the IP due diligence regarding ownership and we had to conduct extensive research to get to the right information”. Thorough IP diligence will be a point of focus in 2021.

Given the central role that IP acquisition is playing in tech M&A, foreign investors should familiarise themselves with the specifics of IP rights in CEE/SEE markets. “Unlike in the US, for example, where buying IP rights wholesale in a transaction is straightforward, in Poland it is necessary to establish the chain of IP ownership and fields of exploitation” says Joanna Wajdzik, senior associate in Wolf Theiss' Warsaw office. “This is complicated by the fact that many CEE businesses use freelancers from universities and other third parties to develop their technology”.

In light of the pandemic, there will be plenty of opportunities for acquirers. Not only is distressed deal flow expected to rise (according to 73% of all respondents), but businesses that have grown through the most disruptive period they have ever faced will be in high demand.

But the health crisis is not yet over – risk remains and navigating the next 12 to 24 months will take strategic acumen and agility. As many as 70% of investors believe that financial buyers are better placed to take advantage of the buying opportunities presented by COVID-19 over this period than strategic buyers. 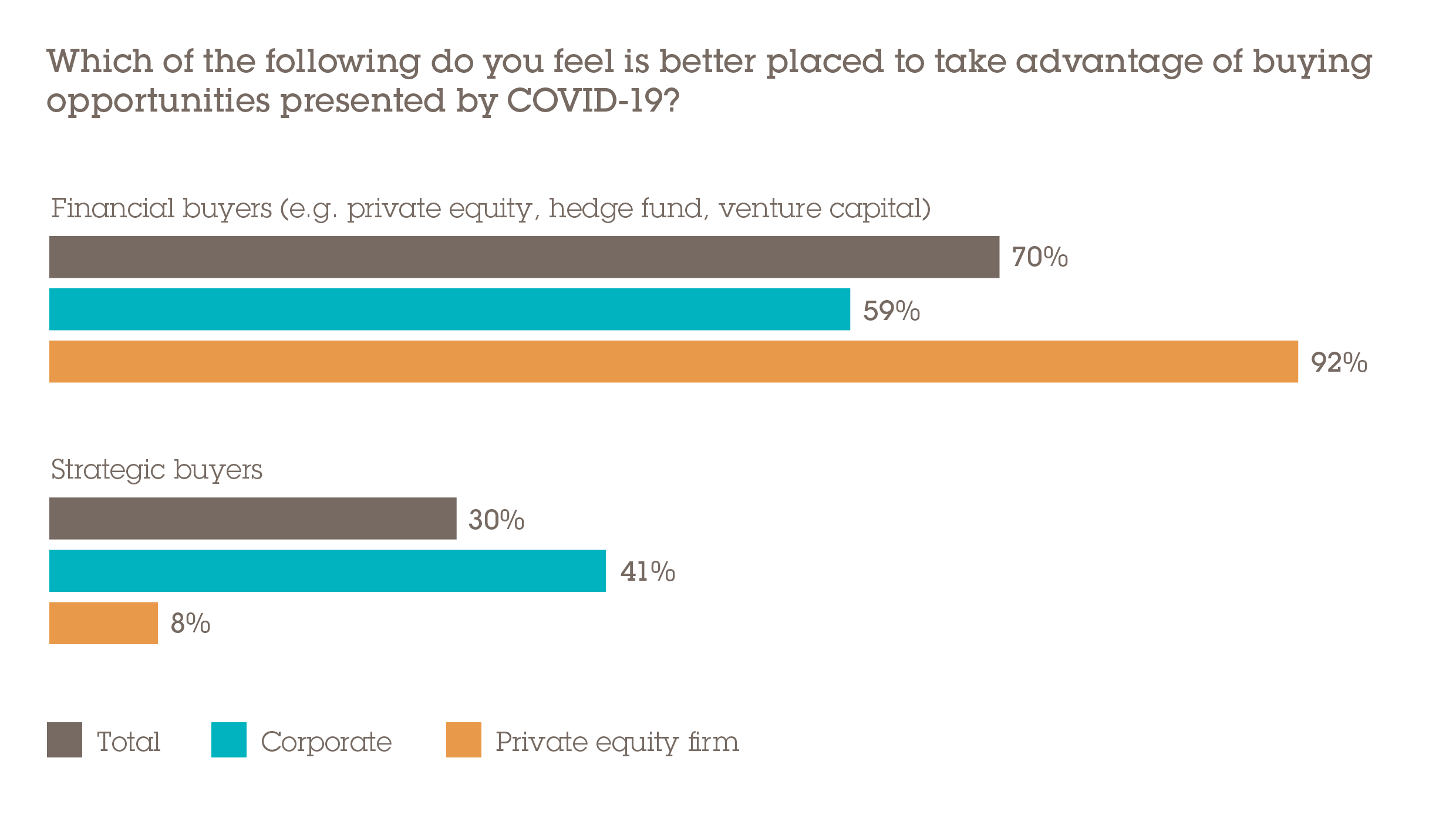 PE is likely to benefit not only from a rise in distressed deal flow but its sector agnosticism, which allows it to capitalise on opportunities wherever they arise. This gives funds a far broader range of companies to look at because they can build a bespoke strategy tailored to that business. Corporates have a more limited scope defined by their sector and strategy.

Private equity also has immense firepower at its disposal. In spite of fundraising falling to its lowest level in five years in the risk-off environment, PE is sitting on vast sums of uninvested capital. Research firm Preqin estimates that funds held US$1.53 trillion as of March 2020, more cash commitments than at any other time in PE's history, even before the pandemic shuttered swathes of the global economy.

“The availability of dry powder among PE firms, pensions and infrastructure units means they are willing and able to transact,” says the managing director of a UK-based PE firm active in CEE. “These are major investors interested in providing financial support, in many cases to companies in need of it.”