Despite the pandemic, an economic downturn and restrictions on both the general public and dealmakers, deal value in 2020 in CEE/SEE increased year on year. And our exclusive survey reveals growing levels of optimism for the year ahead

Central, Eastern and South-Eastern Europe (CEE/SEE) defied the pandemic, with deal value actually rising in 2020. Early intervention as the pandemic emerged and strong fiscal discipline have stood economies in good stead during this crisis period. With robust growth and a brighter outlook than much of Western Europe, it is little wonder that our research shows continued enthusiasm for the region.

Emerging Europe demonstrated exceptional resilience in 2020, being one of the few regions in the world in which the value of dealmaking was up in spite of the COVID-19 pandemic. With a total of €28.5bn in 2020, M&A value increased by 29% compared to 2019, while global value decreased by 7% in the same period. 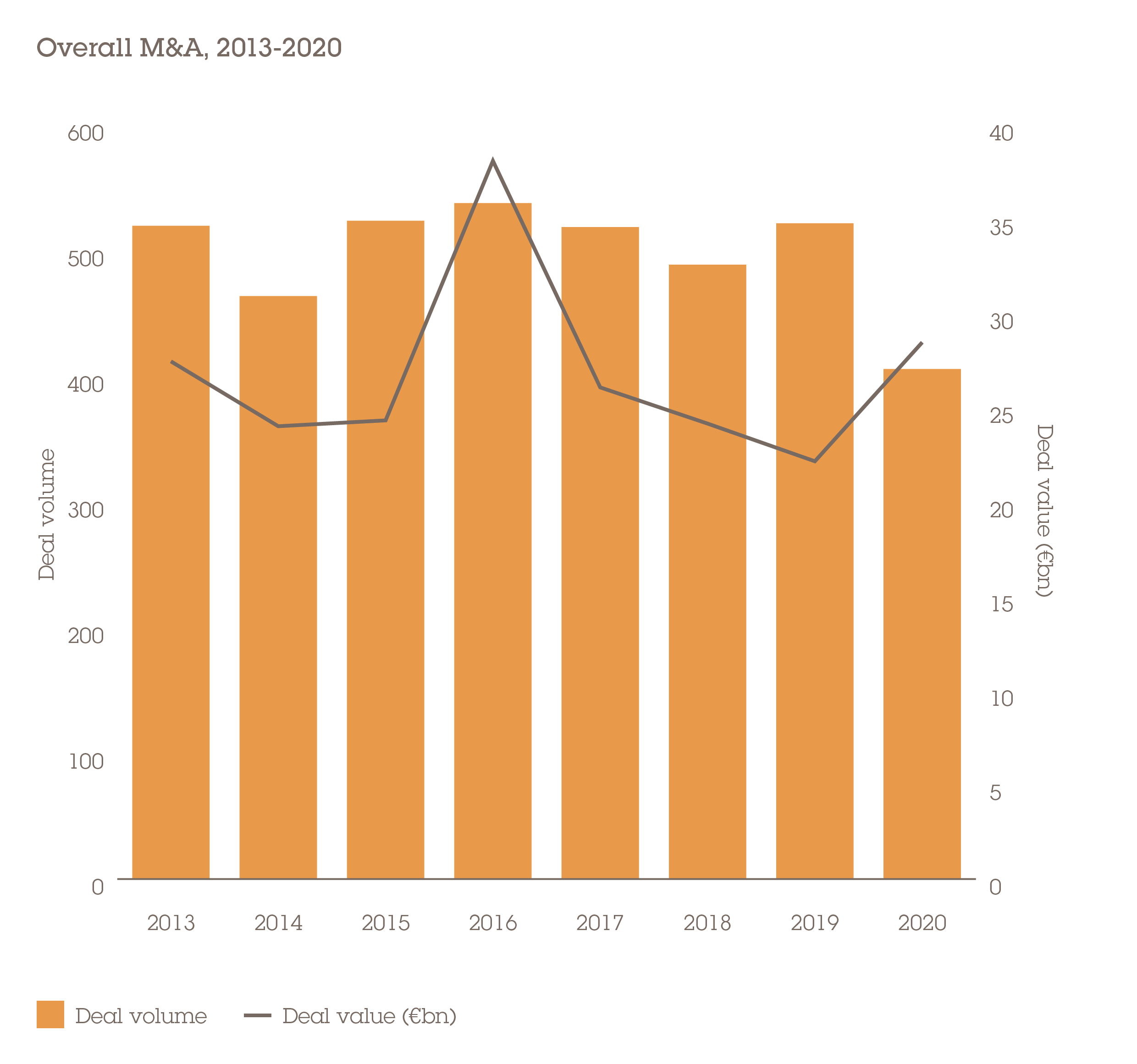 CEE/SEE has not emerged from the market's most punishing year on record completely unscathed, however. The volume of transactions fell by 22% to 406, performance that is more closely aligned with the global decline of 16% and Western Europe's 18% year-on-year shortfall. Even so, the region stands out as a conspicuous frontrunner.

The fundamental reason for this outperformance is that CEE/SEE has more successfully tackled the challenges of the pandemic. There are innumerable factors including population density, different rates of testing and demographic variables. However, the most obvious explanation appears to be the decisiveness of governments in implementing early restrictions. As the pandemic reached Italy in early March, some countries in Western Europe continued to host large public gatherings and major sporting events. In the east of the continent, lockdown measures were already being put in place.

The outcome of this foresight is stronger relative growth. Poland, the largest economy, saw its GDP dip by just 3.6% compared with a fall of 7.5% across the European Union. Unlike the more affluent Western European economies, CEE/SEE nations also went into the pandemic in far more robust fiscal conditions, giving them greater headroom to stoke their economies. Decisive action by the region’s central banks and tax-based stimulus from governments have spared the region from what could have been a markedly steeper economic contraction in 2020.

Poland has maintained its position as the region's number one deal market with its technology, media and telecommunications (TMT) and real estate and construction sectors proving themselves to be especially fruitful. The country saw €11bn worth of deals, claiming nearly 40% of the CEE market. This includes the region's second-largest deal of the year, French telecoms group Iliad's €3.7bn acquisition of Play Communications, the biggest Polish mobile network, with 15 million subscribers. 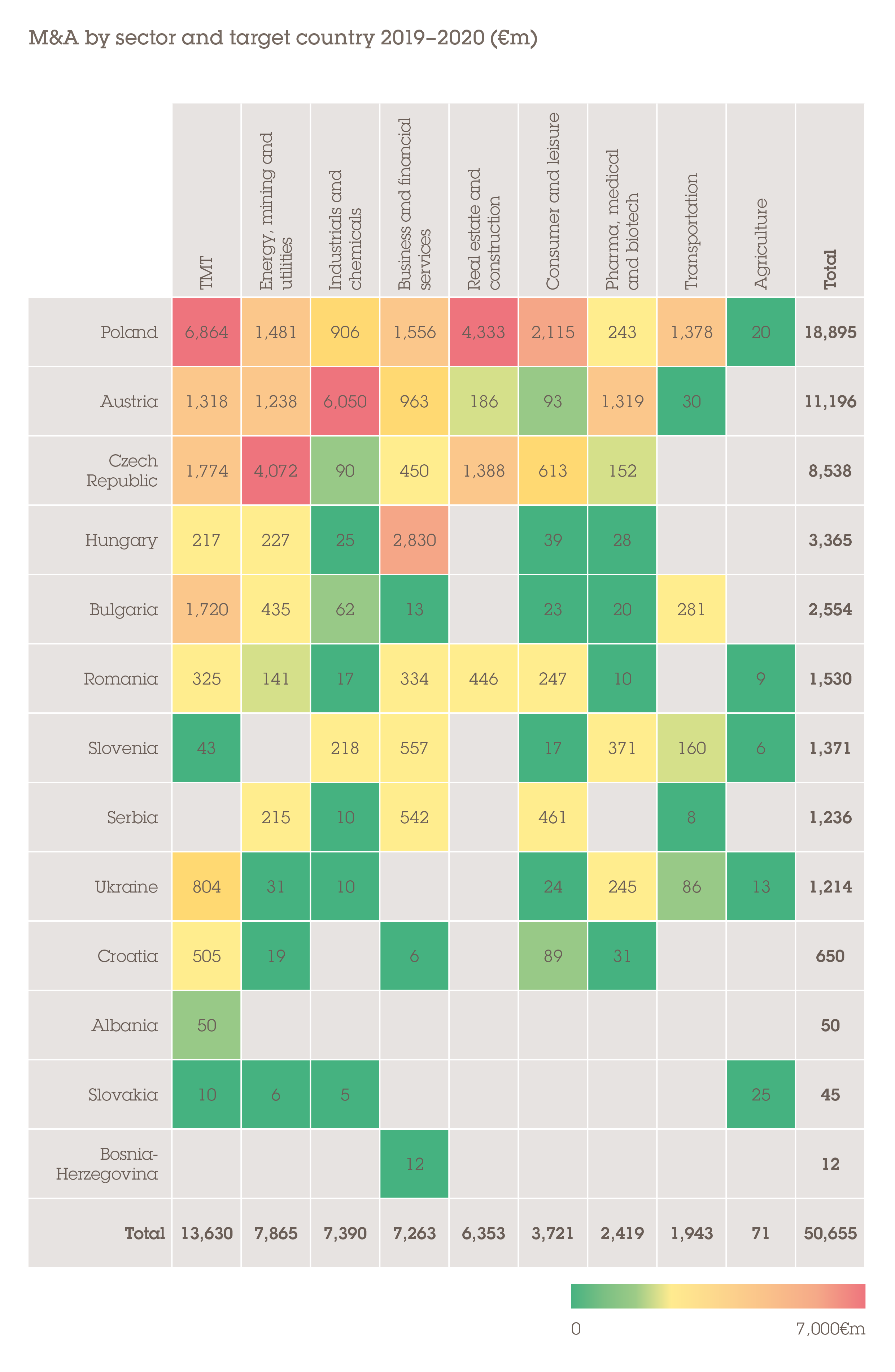 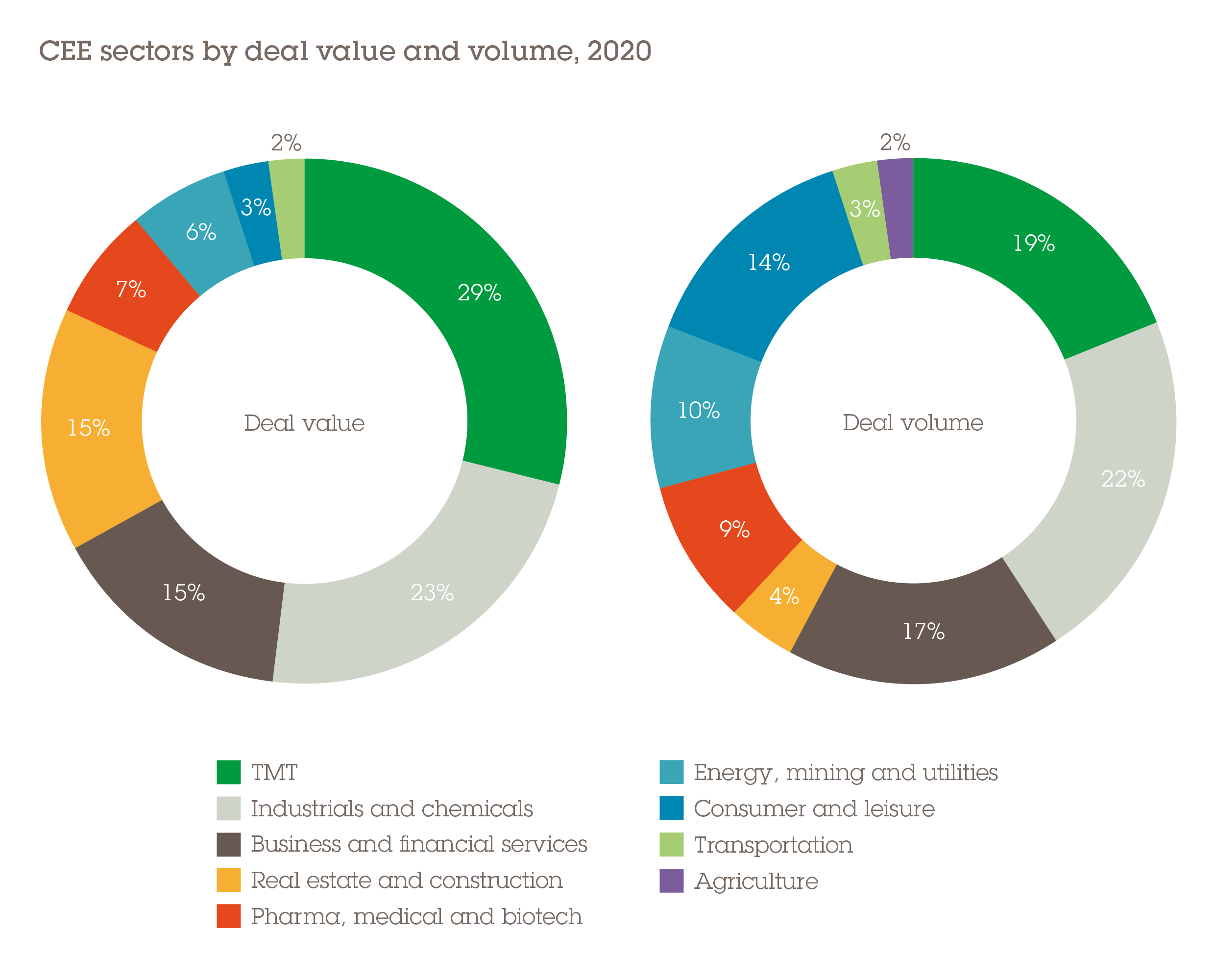 The TMT sector claimed €8.3bn of deals across the region, a 29% market share of total M&A. While technology played a starring role in global M&A in 2020, in CEE it has been telecommunications that has taken a front row seat.

“There's an ongoing consolidation in terms of the larger telecom groups in Poland,” says Jacek Michalski, a partner in Wolf Theiss's Warsaw office. “There's also now a lot of similar movement that you see in many other markets in Europe, with telcos selling their infrastructure as separate towerco units backed by infrastructure investors.”

The case for consolidation

Mergers of major European telecoms equals have been relatively thin on the ground in recent times, with the European Commission frequently raising competition concerns. There are more than 40 groups across the continent, leaving ample room for consolidation. With profit margins eroding and business overheads being spread across a fragmented industry, large operators are mopping up mid-sized players and the chief investment officers of Western European telcos have been turning their attention eastwards. 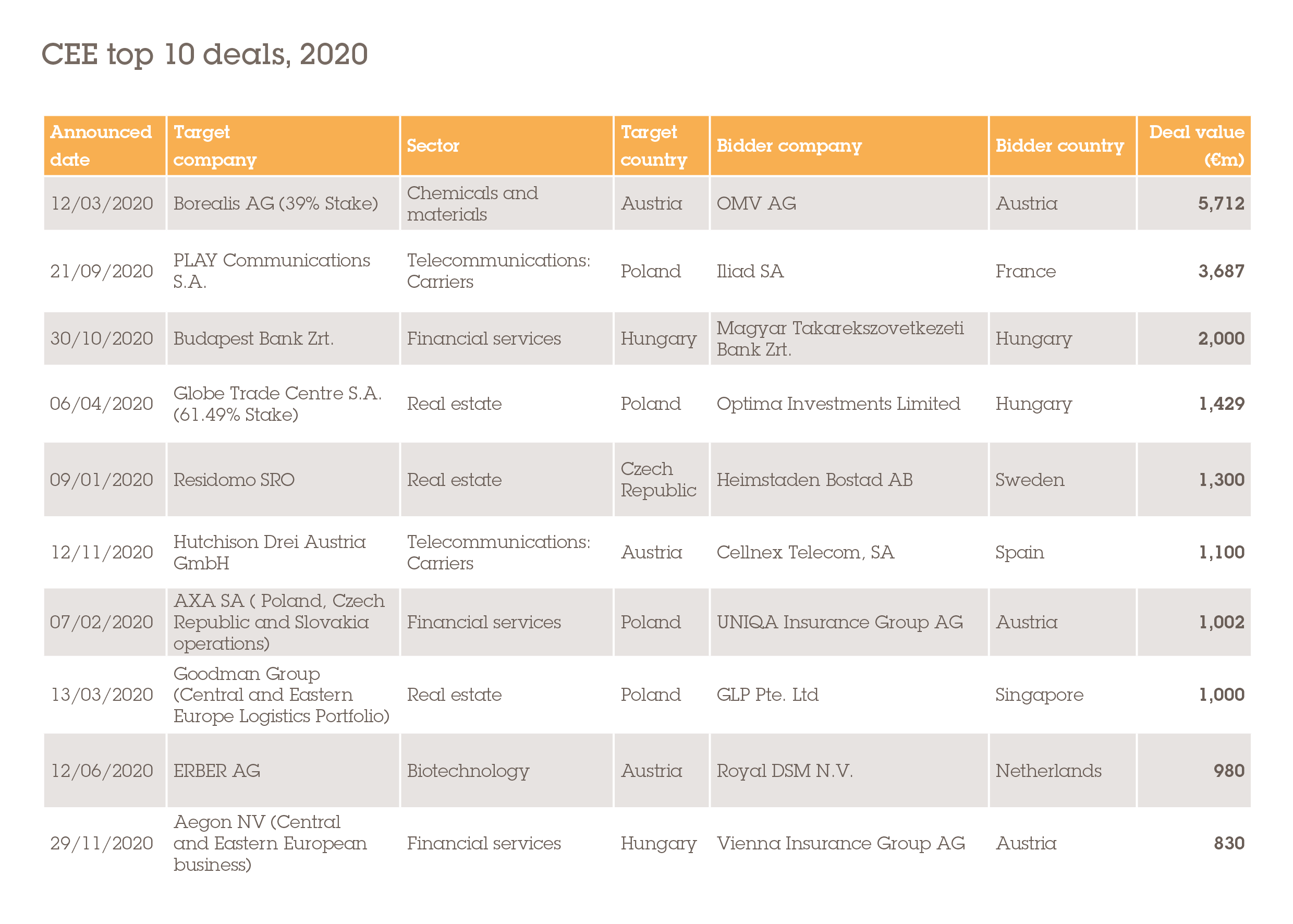 Elsewhere, the French mobile major Orange bought Telekom Romania Communication for €269m in Romania's top deal of 2020. There is potential for this momentum to carry over into 2021, with large foreign telcos continuing to acquire local operators and assessing opportunities to buy mobile towers amid an industry-wide strategic and operational restructuring.

In a close second to TMT with €6.6bn worth of deals, a 23% market share, was industrials and chemicals. With 88 deals in total, it was also the highest-volume sector. The largest deal across the region in 2020 was the sale of an additional 39% stake in the Austrian chemicals company Borealis for €5.7bn to compatriot competitor OMV, which now owns 75% of the business. The newly joined company's capacities make it the number one producer of ethylene and propylene in Europe, and one of the top ten polyolefin producers worldwide. The remainder of industrials activity was reserved for the lower mid-market.

Unsurprisingly, consumer and leisure M&A has been the biggest casualty of the pandemic in 2020, volume cratering by 48% to 59 deals and value collapsing by 65% to €962m, the first sub-€1bn showing for the sector on record. Housebound consumers have refrained from engaging in public leisure activities, many of which have come under temporary bans amid lockdowns. Discretionary spend has also been tightened as income security has become less certain amid growing unemployment and company cost-cutting measures.

Mirroring the wider M&A market, private equity deals fell year on year from 56 to 52 deals, as buyout houses spent the second quarter triaging their existing portfolios with operational and strategic oversight and follow-on financing. However, activity picked back up once economies were reopened and total deal value rose marginally, from €2.3bn in 2019 to €2.6bn in 2020. As a smaller market, PE activity tends to be more uncertain than total M&A, vacillating from one year to the next. However, slightly exceeding 2019's deal value through a global health crisis is exceptional. 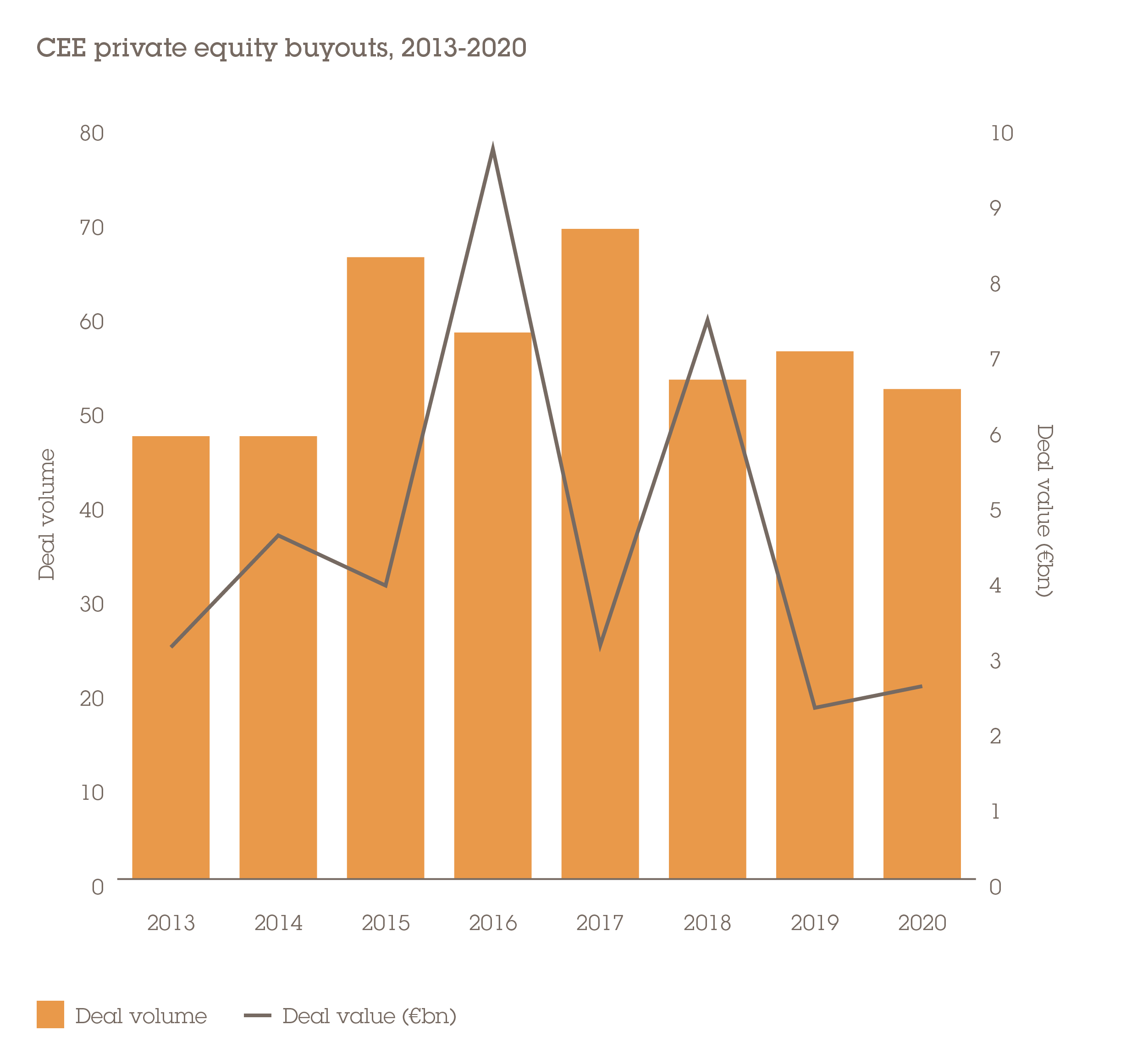 Hungarian fund manager Optima Investment acquired Warsaw-listed property developer Global Trade Centre (GTC) for €1.4bn. Commercial real estate has been one of the worst-affected sectors during the pandemic amid a retreat from office spaces and with the temporary closure of retail outlets. Optima made an opportunistic play, however, announcing the deal in early April after GTC lost around a third of its share price on the Warsaw Stock Exchange.

Meanwhile, US firm Apollo Global paid €500m for a minority stake in Sazka Group, the largest lottery company in the Czech Republic. A rare sizeable consumer and leisure deal, Sazka offers compelling characteristics that many companies in the sector do not. For one, the business launched a website for buying tickets three years ago, meaning it does not rely on physical in-store purchases that have been disrupted by lockdowns and distancing. Moreover, the lottery represents inexpensive entertainment that offers the hope of winning a large windfall during hard times.

Keeping in mind CEE's swift and decisive action in tackling the pandemic and its relative outperformance, our research also shows broad optimism for the region. More than two-thirds (69%) of investors told us that they are likely to invest in CEE/SEE based on past experience, and 65% also said they are likely to invest again on the back of satisfaction with their most recent deal.

The primary motivating factors for selecting the next country of choice to invest in are clear: the forward-looking growth prospects of the local market and the level of economic growth that has been achieved, cited by 67% and 66% of respondents respectively.

The director of strategy of a Japanese corporate goes further, highlighting the significance of the relative purchasing power of citizens in a country as a strong determining factor on whether to invest. “GDP per capita will have the biggest impact on our decisions. When we look at the structure and sustainability of companies, this metric provides a clearer picture of future potential and the development of the company.”

One of the challenges of certain markets, including in the Czech Republic and Hungary, is the relative lack of available assets to purchase given the size of their economies. This can limit opportunities, especially for large multinationals and mega PE fund managers with plenty of capital at their disposal. “The size and depth of the market will impact our choice, because this has a direct effect on the number of opportunities to invest and the capacity to expand business operations further,” says the CFO of a US corporate.

For this reason, expect Poland to continue its reign in 2021. While its GDP per capita is lower than that of both Austria and the Czech Republic, it is not only comfortably the largest economy but has the deepest pool of assets for investors to choose from, and therefore consistently delivers the highest volumes of deal flow. That won't change anytime soon.