Sector watch: The industries making waves in CEE dealmaking in 2021

As business activity was forced online in 2020, the technology sector was always likely to outperform all others. And it did just that. Just as the Dow Jones US Technology Index accelerated from its first quarter slump to reach new heights in a matter of weeks, similar signs of buoyancy can be observed in CEE/SEE. In October 2020, even as COVID-19 infection rates had begun to resurge in a second wave, Allegro, Poland's answer to Amazon, pulled off not only the biggest IPO in Europe but the largest in the Warsaw Stock Exchange's history.

Appetite for technology has been a central theme in the region's M&A markets of late. TMT deals came to €8.3bn in 2020, a 29% market share, higher than any other sector; this was invested across 79 deals, a 19% market share, putting TMT in second place on a volume basis behind industrials and chemicals (I&C).

This is somewhat unexpected. I&C tends to be highly cyclical in nature and follows falling consumer demand. Therefore, it does not tend to perform well during periods of economic dislocation. However, the sector defied expectations by recording 88 deals, a 22% market share, and €6.6bn worth of assets changed hands.

Austrian oil and gas and petrochemicals company OMV acquired a 39% stake in domestic chemicals firm Borealis for €5.7bn, taking the lion's share of the sector's aggregate deal value. Discounting this pushes I&C down the ranks just above energy, mining and utilities (EMU), as might be expected given the I&C’s correlation with economic performance. It can take time for investors to gain their bearings in a downmarket before they are prepared.

The increased stake that OMV took in Borealis is an indication of what to expect of long-term activity within the sector. OMV is repositioning itself in preparation for a less carbon-intensive future. Oil and gas producers are using M&A as a means of pushing into renewables and diversifying into higher-value petrochemicals. This is not only in preparation for the so-called energy transition, but to insulate themselves from the volatility that has plagued commodity markets for an extended period.

Tech to the future

When it comes to the sectors expected to see the most growth in deal numbers, TMT sits at the top of the list for 55% of respondents in our research. “The current situation adds to the appeal of tech and telecoms. Remote working conditions have called for new internal digital strategies that will promote growth in these sectors and lead to more deals,” says the CFO of a Spanish corporate. 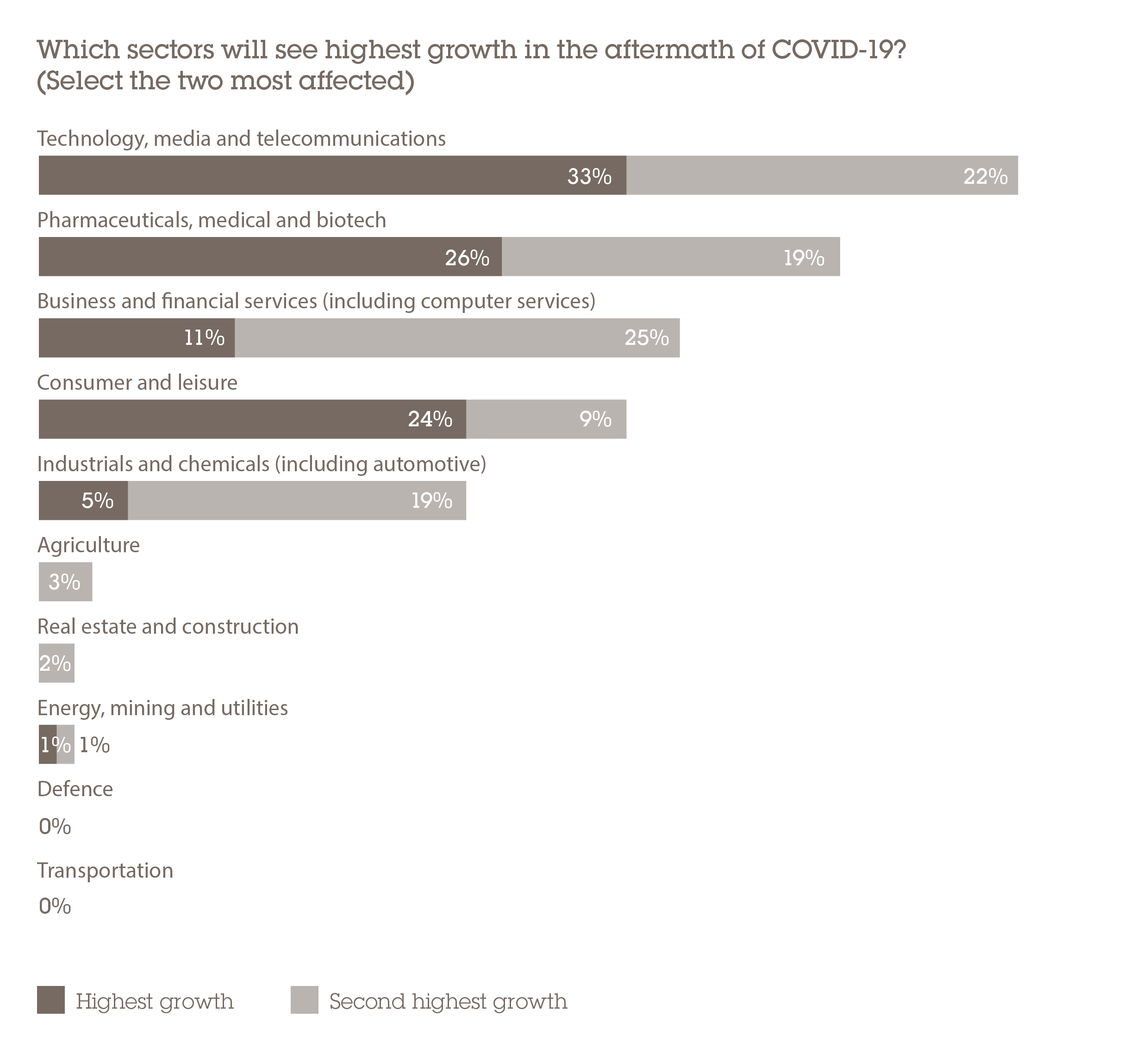 CEE/SEE continues to show exceptional strength in numerous technology-related areas of the economy. Poland has emerged as a world-leading games development market in recent years. CD Projekt Red, maker of the hotly anticipated Cyberpunk 2077, having the biggest market cap on the Warsaw bourse before it was superseded by Allegro's US$12bn float.

Owing to extensive government support and investment into computer science and coding university programmes, many countries in the region have high levels of technical expertise, with software development being a strong suit not only for Poland but Ukraine, the Czech Republic and Romania. Strong technical education and subsidies have also made CEE/SEE one of the deepest IT talent pools, which is driving growth in a large outsourcing market that continues to be attractive on a cost-to-quality basis. It has been estimated that Poland has 279,800 IT professionals, more than any other country in Europe, followed in the region by Ukraine (184,700) and Romania (116,100).

Telecoms is another industry hotspot, driven home by the demand for fast and dependable connectivity in light of lockdown measures. This is an area in which Romania excels, with its fixed broadband speeds of 188Mbps being the seventh-fastest in the world, behind only Denmark and Sweden in Europe, according to the Speedtest Global Index.

French telco Iliad's €3.7bn acquisition of Play Communications in 2020 was followed by Play divesting a 60% stake in its subsidiary Tower Co for €800m. The spinning off of mobile tower assets and fibre networks is a trend observed across Europe as telecoms providers seek to improve their capital efficiency and realise value for shareholders.

However, a note of caution. Given the compelling characteristics of TMT, and tech in particular, especially in light of the events of 2020, asset multiples are typically on the high side. This is also true of telecoms infrastructure assets, which S&P has noted are typically valued at two to three times the valuations of combined telecoms groups. Our research backs this up: 70% of respondents tell us they feel that TMT is overvalued, above any other sector.

“The main reason for technology and telecoms sectors being overvalued is the usage and dependence of other sectors,” says the head of M&A of a French corporate. “Media services are dependent on technology and also crucial during this crisis period and this is driving up valuations there too.”

The polar opposite of TMT is the energy, mining and utilities (EMU) sector, which 61% of respondents say is undervalued. What's more, 58% say this will be the industry in which deal flow will continue to be the most negatively affected by the pandemic. Oil and gas companies have suffered tremendously from volatility in commodity markets. While some investors may bank on a recovery and buy now that asset prices are significantly marked down, for the majority this may be too much risk to swallow. 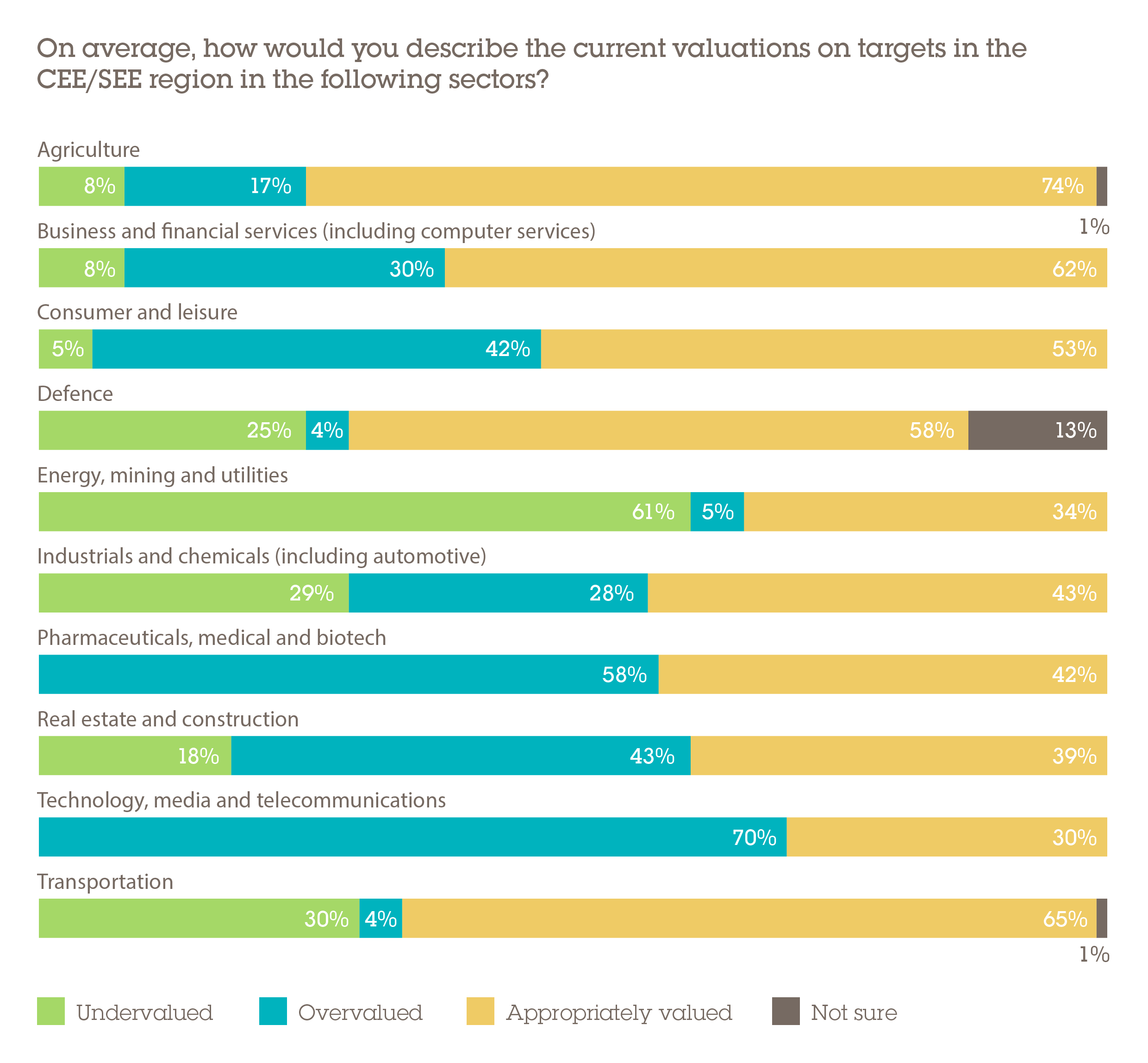 Unlike many technology businesses, especially within software, EMU businesses tend to require extensive capital expenditure. This can be a major turn-off in what remains a period of high uncertainty. “Capital intensive sectors continue to be negatively affected by the COVID-19 crisis,” says the head of M&A of a German corporate. “With economies shrinking, companies have found it difficult to generate additional capital and growth potential.”

Intelligently structured distressed deals, however, could prove to be a highly profitable strategy. At no point since the global financial crisis has there been a better time to seek out stricken assets and this is especially true in the EMU sector. The industry stands out for 67% of respondents as where to expect the biggest rise in distressed deal flow; this is followed by 48% who singled out the I&C sector. 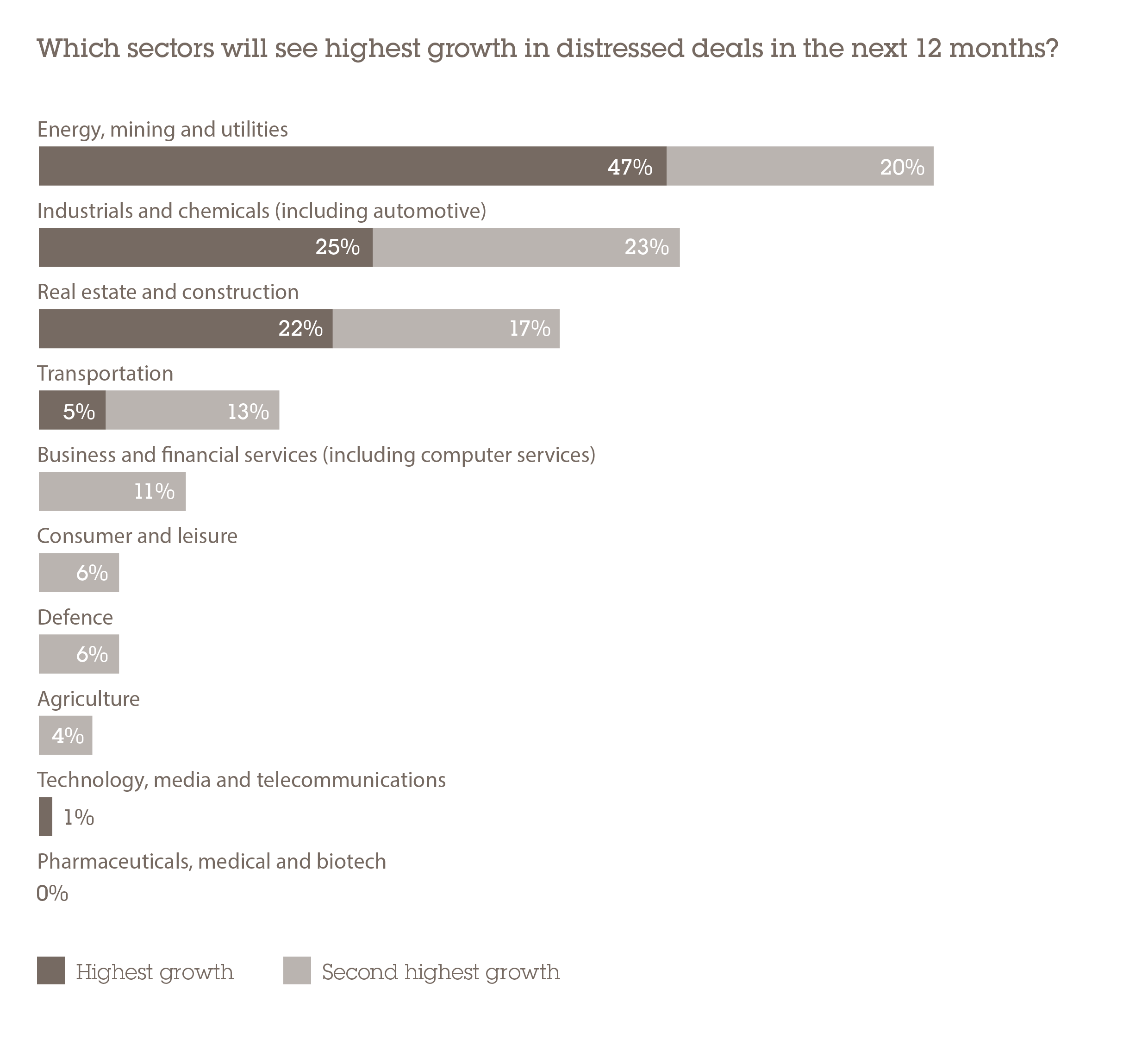 Of particular interest in CEE is liquified natural gas (LNG) as well as renewables, the latter being spurred by the European Union's world-leading sustainability targets. Poland's LNG regasification terminal in Świnoujście is the biggest facility of its kind in Northern Europe and the country is working on the possibility of transferring gas from the Baltic Sea to Slovakia and Hungary. There is significant potential in the region for the expansion of LNG, driven by the desire to reduce dependency on Russian gas imports. This will require further investment into infrastructure. For strategic buyers with enough cash on their balance sheets this may represent a compelling opportunity. However, for the time being at least, PE is likely to be drawn to the many other lower-risk sectors from which it has to choose.